I don’t care if it’s encrypted, change the default password!

So your ISP was really nice and gave you *free* WiFi-enabled router with password-protected encryption and everything? Change the default password. Change it now – because there is nothing safe or secure about it.

The danger of leaving your wireless access point open has been repeatedly reported in the news and countless blog entires. Fortunately, in the interest of protecting their own networks and making their customers feel a little safer, many service providers have been setting up customers with password-protected WiFi-ready routers with built-in firewalls. Awesome, right? Well, sort-of.

As an example, Verizon FiOS customers are given a standard issue router that takes care of everything they need to get a siple home network running and even includes encrypted WiFi protected by 40-bit WEP!

Security-minded people who just finished reading the above sentence have likely done a face-palm at this concept. WEP is broken and has been broken for quite some time. As if that was not enough, 40-bit encryption is the lowest option available and has become trivial to attack and recover if the attacker is in range of the access point. Decryption attacks are possible at even greater distances if the attacker has enough data being broadcast from the access point.

Could this shoddy security deployed on a massive scale to uninformed, yet trusting users get any worse? Sure. When you have to build millions of devices and deploy them efficiently, you pre-configure them exactly the same, or have some sort of predictable pattern that makes them unique – like password selection. This is exactly what the manufacturers and ISPs affected by the vulnerability have done.

The default password on a Verizon FiOS router is based off of the last 5 hex values of the WAN port MAC address. To use my own decommissioned unit as an example, the WAN MAC address is 00:26:62:C0:6A:BF and the default WiFi key is 2662C06ABF. Granted, the WAN MAC address is generally a difficult thing to discover unless you’re standing in front of the router – which is why some helpful people made a database of all the default passwords and used the ESSID of the wireless signal as the lookup key.

The Router Keygen program is an application for Android phones that uses the phone’s WiFi to scan an area for all wireless access points in range and highlights which points are still set to the default configuration. Selecting a point then tells the user what the password is. The database of all entries takes up about 28MB of storage space, but this is a trivial amount of memory for every Android phone on the market.

Here’s a terrifying and real-world example: I was visiting a friend who lived in a high-rise apartment complex – one of those places where you can see into the balcony windows of about a hundred other apartments across the courtyard. While sitting comfortably in his living room, I turned on Router Keygen to see what would come back. The results were staggering:

25 vulnerable networks from the comfort of my chair.

The screen-shot to the left is one of three pages of vulnerable access points that I could have accessed and utilised with my phone, laptop, or any wireless device of my choosing. This whole process was completed in the time it took me to unlock my phone and click 1 button. Total wait time for the phone to lookup and start displaying keys was maybe 3 seconds. It’s hard to say with any certainty as my jaw was sitting in my lap from the number of results returned.

Sitting in my friend’s comfy chair, I was looking at a list of about 25 vulnerable networks – any one of which I could have connected to, used their internet connection, other computers, network storage, music and video collections, webcams, and anything else that was open and listening on the network. 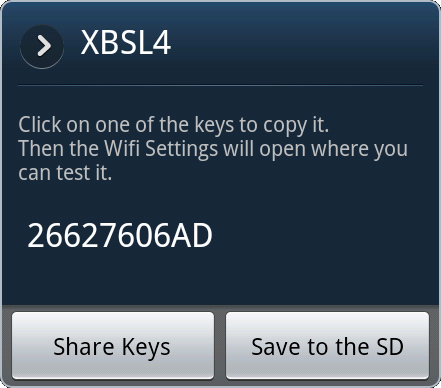 The developers of the application were also very thoughtful in giving the ability to lookup passwords manually by ESSID. Running Kismet or similar wireless monitoring software on a laptop, an attacker can quickly and conveniently look up passwords for wireless access points that are out of range for the phone’s antenna, but not for the laptop. If this table on Wikipedia is an accurate representation of reality, someone could access and utilise a vulnerable network hundreds of feet away. Equally as bad, a wireless sniffer could capture and actively decrypt the wireless traffic from thousands of feet away.

Still happy with that free router your ISP gave you? Rather than throwing it in the trash, you should simply fix your security. Here are some helpful tips from the US-CERT Team regarding wireless security with additional comments from me in italics:

If you happen to have a neighbor broadcasting that obvious factory-default SSID, please take a moment to tell them how insecure they are and encourage them to change the settings on their router.

Computer guy. Digital forensics guy. Hacker. Slayer of spam. Barbeque pitmaster. Cake engineer. Expert at nothing. Opinions here are mine alone. Topics presented may be a joke, but probably aren't.
View all posts by J-Michael Roberts →
This entry was posted in Uncategorized. Bookmark the permalink.

This site uses Akismet to reduce spam. Learn how your comment data is processed.